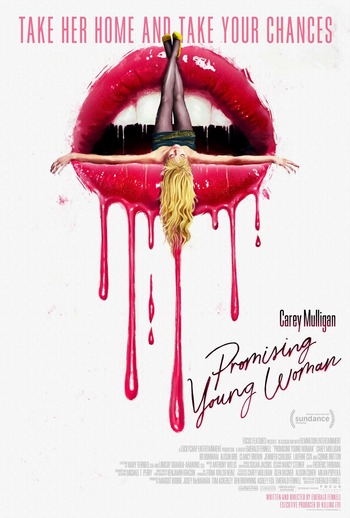 "I said, 'What are you doing?'"
Al Monroe: I mean, it's every guy's worst nightmare, getting accused like that!
Cassie Thomas: Can you guess what every woman's worst nightmare is?
Advertisement:

Cassandra "Cassie" Thomas (Mulligan) is the eponymous promising young woman. Once on track to become a doctor, she dropped out of medical school following her best friend's suicide, and now commits herself to acting drunk in clubs and bars to teach a lesson to the would-be rapists that unsuspectingly take her home.

However, when Cassie unexpectedly meets a face from her past in former classmate Ryan (Burnham), her plans for revenge get thrown off course and she is forced to face what led to her dropping out of med school in the first place.

Following its premiere at the 2020 Sundance Film Festival, the film was initially set to be released on April 17, 2020, but was pulled from the release schedule as a result of the COVID-19 Pandemic. It was ultimately released on December 25, 2020.