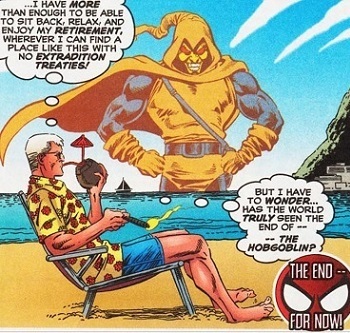 "And for what?
It's been many years,
Yet the screams of the vanquished still ring in my ears.
And for what?
I've blood on my hands.
I wait for my place in the halls of the damned.
And if I could go back and make my amends,
I'd make all those mistakes again.
I'd kill every last one of those bastards, my friend!"
— Alestorm, "Pirate Song"
Advertisement:

The Retired Monster's past is full of evil and atrocity and he's okay with it. In fact, he caused most of it. When you first see him, he'll come across as Affably Evil at best; he'll also have experience and advice that he might give out to a young hero, although possibly the best he can do is "You should stay away from people like me". However, he'll be creepier than the Cool Old Guy or Retired Badass, and he'll tempt the young ones, giving them advice more on the cynical side of the Sliding Scale of Idealism Versus Cynicism. You see, he's not doing any gross evil acts now — he may not have done so much as run a red light in the past ten years — but that's only because he's tired. As the backstory of this character becomes known, we learn that they kicked the dog a number of times, perhaps took a hopscotch over the Moral Event Horizon, only stopping because for some reason they got sick of it.

Perhaps he finally came out worse for wear after a run-in with the guy who's now The Mentor. Maybe he was caught and sent into exile and now has at least enough fear of the authorities to not put a toe out of line. Then again, often, they have just literally retired, saying "I'm too old for this" and using their pension fund of Nazi Gold to support a life of margaritas on the beach.

They've never apologized (not sincerely at least) for their actions, there was no Heel–Face Turn, and they are not The Atoner who'll help to make up for some wrong. No, they'll just sit back, but if a character underestimates their evil, if they think that because they aren't as bad as the more active monsters, that they're OK, they may get a horrid reminder of what the Retired Monster is still capable of. Usually, they'll either be a mentor to the villain they're Passing the Torch to, or even a Token Evil Teammate if they are helping the hero.

It's not rare for this kind of character to produce copycat villains, either out of genuine admiration or because said villains are trying to throw the authorities off track by blaming the Retired Monster for their crimes. Usually, the Retired Monster is less than amused about this, and he will go straight back into action to either dispose of these guys personally or to help the heroes in apprehending them, as a way to "clean" his name of crimes he didn't commit. In any case, he has bucket-loads of Villain Cred.

Monsters who don't retire, or come out of retirement and continue to be evil in old age, can become Evil Old Folks. Sub-Trope of Karma Houdini, due to the fact that very few of this type of character are found in jail. Compare the Retired Badass, one of several good counterparts, and the Retired Outlaw, which may occasionally overlap. Contrast The Atoner, who said monster can become if he does end up regretting his past crimes later in his retired life.

Black Spot Pete and his best friend and partner, Cantankerous Tim, famously raided many ships, which included stealing the prized diving gear of Dimitri Lousteau's grandfather, Reme Lousteau. However, when Captain LeFwee moved in after Tim was mutinied by his own crew, Pete retired before he was eventually reduced to nothing more than a drunkard drinking his sorrows away at the local pirate tavern.

Black Spot Pete and his best friend and partner, Cantankerous Tim, famously raided many ships, which included stealing the prized diving gear of Dimitri Lousteau's grandfather, Reme Lousteau. However, when Captain LeFwee moved in after Tim was mutinied by his own crew, Pete retired before he was eventually reduced to nothing more than a drunkard drinking his sorrows away at the local pirate tavern.