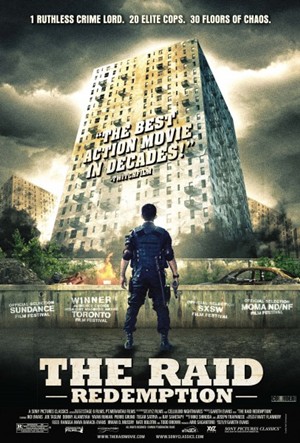 And 100 minutes of awesomeness.
"Good morning, friends. You may have heard that we have some uninvited guests. I didn't invite them and they are certainly not welcome here. For the benefit of everybody here, you are welcome to provide assistance in exterminating these insects, and as reward you shall live here rent-free. You may greet our uninvited guests on the sixth floor. Good hunting... And don't forget to have fun."
— Tama's villainous rousing speech handily explaining the movie's premise.
Advertisement:

Serbuan Maut (Deadly Assault or Death Raid), known as The Raid: Redemption in English-speaking countries, is a 2011 Indonesian martial-arts action film directed by Gareth Evans. The movie stars martial artist Iko Uwais in the leading role, making this his second team-up with Evans (the first being Merantau).

Deep in the heart of Jakarta's slums sits what appears to be a derelict apartment building — but is, in reality, a well-guarded and well-armed safe house for some of the world's most dangerous criminals. Though the run-down apartment block is considered untouchable to even the bravest of police, on one rainy morning, an elite strike team rolls out with a single order: raid the building and take down the notorious drug lord who runs it. All goes according to plan at first, but when a chance encounter with a spotter blows their cover and news of their assault reaches the drug lord, the building's lights go out and the "tenants" cut off all the exits. Stranded on the 6th floor with no way out, the strike team must fight their way through the city's worst criminals to carry out their mission...or at least survive long enough to find a way out.

A sequel, The Raid 2: Berandal, was released worldwide on 28 March 2014. An American remake bringing back Evans as producer and Yayan Ruhian (Mad Dog) and Uwais as fight choreographers has been announced, but is currently on hold.

Titan Comics published The Raid Comic Book series that expands on the characters from the movies.

The Raid contains examples of:

Tama killing four hostages and then killing the fifth brutally with a hammer just because he can.

Tama killing four hostages and then killing the fifth brutally with a hammer just because he can.