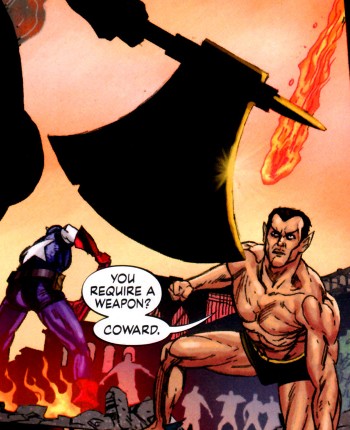 And you call yourself the God of War?
"Good! Now we can fight as warriors! Hand to hand! It is the basis of all combat! Only a fool trusts his life to a weapon!"
— Gray Fox, Metal Gear Solid
Advertisement:

Many times, heroes have to face their enemies in battle. They can have access to a vast variety of weapons, from swords to axes to staves to knives. However, sometimes the hero will take a third option and fight with his own hands.

Sometimes is because the character is a Bare-Fisted Monk who uses martial arts, or perhaps doesn't like weapons or killing. Sometimes it's because the character is so damn strong that he doesn't need weapons at all. Often it represents a very blunt, straightforward personality. If the main hero travels with his friends, expect his lancer or Big Guy to use weapons instead, to make the contrast clear. This can also be played with the unarmed hero and the weapon-using villain.

A lot of comic book heroes who are Badass Normal (no superpowers) eschew guns not just on principle but because it just makes them all the more awesome and it makes fights more interesting in print. Because comics are a static medium, artists find that hand to hand combat, being up close and personal, is just more much more dynamic to illustrate than ranged combat with firearms. Also, in decades past, they often had to also eschew swords and other bladed melee weapons because their practical use in many cases would violate not only Thou Shalt Not Kill, but also the Comics Code Authority. It the character does carry a sword, it is typically an Ornamental Weapon or there is some pretext as to why it is never used to actually fight anyone such as its primary use being a magical object and not a melee weapon.

Attacking them with weapons is usually a bad idea.