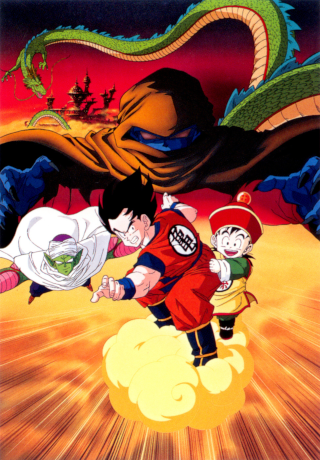 Dragon Ball Z: Dead Zone (Japanese title: Dragon Ball Z: Ora no Gohan o Kaese!!, lit. "Dragon Ball Z: Return My Gohan!!") is the fourth Dragon Ball movie and the first under the Dragon Ball Z banner. It was released between episodes 11 and 12, with it premiering at the 1989 Toei Cartoon Festival (along with three other movies from the Akuma-kun, Himitsu no Akko-chan, and Kidou Keiji Jiban series). It was released in 1989 by Toei Animation, originally titled simply Dragon Ball Z: The Movie during its theatrical release. It was then dubbed into English by the Canadian company The Ocean Group in 1997 for the American company Funimation Entertainment, the title being changed to Dead Zone. It was then re-dubbed by FUNimation itself in 2005.

The story sees a demonic being named Garlic Jr. take over the Lookout Point as revenge against Kami for being chosen over his father for the position of God of Earth, who in turn tried to take it by force, was defeated and cast into the Dead Zone as punishment. Goku gets in on the action when Garlic's lackey kidnap Gohan for the four star dragon ball on his hat, joined shortly by Krillin and Piccolo as they try to stop Garlic from making his wish and taking over the world.

Curiously, it proved popular enough that Toei revisited it in a anime-only sequel arc in the Dragon Ball Z anime, the Garlic Jr Arc, set between the Namek arc and Android arc.

After Gohan eats an apple, he somehow gets drunk and goes on an acid trip. Footage taken from Pioneer's dub of Movie 1

After Gohan eats an apple, he somehow gets drunk and goes on an acid trip. Footage taken from Pioneer's dub of Movie 1