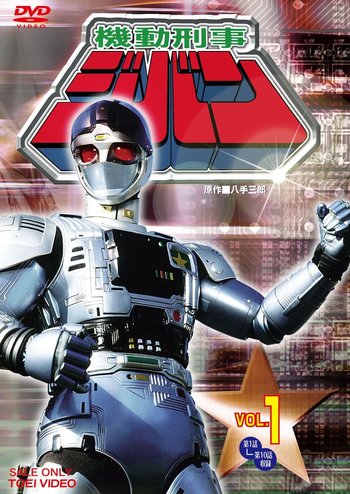 Your move, creep.
Kidou Keiji Jiban ("The Mobile Cop Jiban") is the eighth entry in the Metal Heroes franchise and the first entry in the Heisei period, airing from 1989-1990. Created by Keita Amemiya (of GARO fame) the premise for the series combines elements from Robocop and the 1970s tokusatsu Robot Detective.
Advertisement:

Sometime in the not so distant future, a detective named Naoto Tamura transfers to the Central City Police Department. However, he is soon killed by agents of the evil Bioron organization, led by the nefarious Doctor Giba. Then he gets revived as a cyborg police officer called Jiban, who sets out to rid the world of the threat that once killed him.