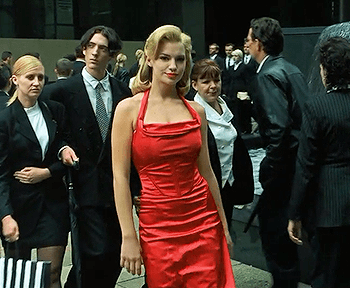 Lady in Red is something of an old-fashioned trope, where The Vamp or the Femme Fatale was designated by having her wear bright red formal wear. The Lady in Red wasn't necessarily a slut, but she was strongly sexual, and often had a strong personality. In more prudish times the Lady in Red was considered almost dangerous. Red clothing is also associated with prostitutes, chorus girls and other dancers, and other women attempting to be sexy.

This trope is about the character type, not the dress itself. A character wearing a red outfit does not always make her a Lady in Red.

The Glamorous Wartime Singer is often a Lady In Red, as is The Chanteuse; sometimes, the dress will be a Happy Holidays Dress or Sexy Santa Dress.

This trope is grown women only; for little girls, see Little Dead Riding Hood and compare Princesses Prefer Pink. Contrast with Virgin in a White Dress and Widow's Weeds.

A Lady in Red is sexy. She might be morally ambiguous but she mostly displays a form of sexual availability, a signal that she's ready to fulfill a guy's sexual desires. The Woman in Black may be sexy and enticing but, in sharp contrast to her crimson counterpart, she is also openly menacing and sexually unavailable, especially if her outfit covers her whole body. In any case, the Woman in Black clearly conveys that approaching her is not a good idea, whereas the Lady in Red means to arouse lust.

Please note that according to Chinese mythology, a woman who dies in a red dress, or commits suicide in one, is able to come back to haunt those who wronged her, which leads to a multitude of ladies in red dresses in Hong Kong horror movies. These ladies are not necessarily a Lady In Red. Additionally, in Bollywood and throughout Southeast Asia, red is more associated with marriage and love than with sex. Thus, a woman in a red sari is almost never a Lady In Red. All of the ideas above come mostly from Western culture.

Not to Be Confused with The Woman in Red, though Kelly LeBrock certainly wears one in the film and all promotional materials.