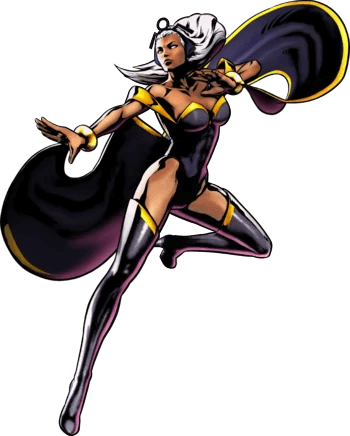 Starlight: I can't wear that. ... It's – it's not me.
Seth: You're wrong. It's totally you. It's bold, it's brave, it's feminist.
Starlight: How is that feminist?
David: Empowering. It says you're confident in your own skin, and you're not afraid to show it.
— The Boys (2019)
Advertisement:

A character fights in a skintight leotard or, more generally, a swimsuit-esque one piece. Pretty common as a Super Hero trope, especially during its Golden Age, where the costume originated as circus performers' garb and since then it isn't always used for Fanservice (strongmen and wrestlers were as likely to wear it as acrobats, and so you'll still see the occasional hulking bruiser wearing it to show off their massive musculature).

One of the leotard's advantages is that it is more "modest" or less revealing than a two-piece garment like a bikini, and thus for a long time was used in comics, games, TV shows and media to convey the portrayal of a sexy female character (or at least, "bold") without enraging Moral Guardians. Note that also, back in The '80s and The '90s the leotard (or one piece swimsuit) was "the" ultimate in fashion clothing, being much more popular than the two-piece garments and portrayed in aerobics shows, Baywatch and such, so it can be used in retro references too.

Similar to Underwear of Power, some females who wear this may suffer a Groin Attack at least once either for comedy, fan service, or simply for her enemy to really humiliate her. Especially for a Superheroine it's not uncommon because, surprisingly, some of them may be weak in that spot.

This is a Fanservice trope, the backbone of Most Common Super Power. Essentially a cross between Sensual Spandex and Show Some Leg. Will often feature a Navel Outline.

Compare Minidress of Power, Playboy Bunny, She's Got Legs, Showgirl Skirt, Underwear of Power (which is often worn in a way that pretty much looks like a leotard anyway), Walking Swimsuit Scene, Superheroes Wear Tights.