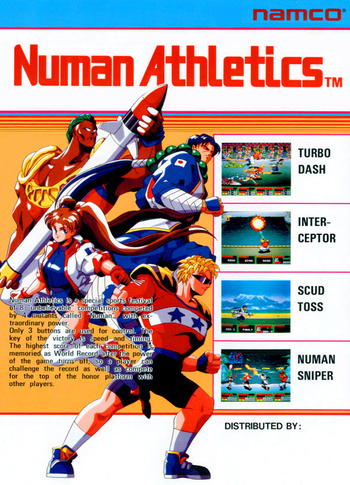 We are the Numan Athletes - modern day supermen. We'll show you the best events!
Advertisement:

Numan Athletics is an Arcade Game by Namco released in 1993. Four Numans - Sharon L'Halles from France, Harry Boffin from The United States, Masaemon Nakamura from Japan and Bongo Tembo from Kenya - take part in competitions. This is accomplished by 1 to 4 players who have to press buttons according to each competition. To pass it, at least one player must earn enough points, otherwise they have to pay a quarter to try again with lower requirements. After each round, the players' scores are compared assuming there's at least two of them, and the one with most points (or simply beats the game alone) wins.