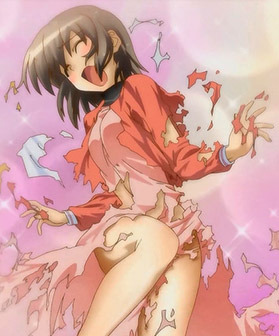 Risa took 42837 damage!
Kevin Murphy: [as Padmé, when she is slashed by the Nexu] Ow, that just bares my midriff!
Mike Nelson: What a conveniently alluring injury.
— RiffTrax on Star Wars Episode II: Attack of the Clones
Advertisement:

A variety of Fanservice provided by damaging a character's clothing in such a way as to provide teasing glimpses of the flesh or lingerie beneath.

Female characters tend to fall victim to this, converting their usual costumes into something more Stripperiffic. Male action heroes might instead simply lose their shirt altogether for a Shirtless Scene, though lately, the Female Gaze element has increased. And both men and women can end up getting their clothes shredded following a transformation into a larger form (usually of the unwilling kind, as characters who can control their transformations tend to take preemptive steps to avoid clothing issues).

Can induce You Must Be Cold or Defeat by Modesty. See also Action Dress Rip, Battle Strip, Final Battle-Induced Shirt Loss, and From Dress to Dressing. For the non-combat version, see Wardrobe Malfunction. A female character who likes Kicking Ass in All Her Finery is not immune to this (but it's not common). If a character becomes upset or angry because they loved those clothes, it's also My Favorite Shirt. See Stripping Snag for cases where the clothing is ripped off accidentally, or Giving Them the Strip when the character opts to shed a garment to avoid injury or entrapment.

The Nudifier is typically a weapon which has no other effect than this. Hat Damage is a non-Fanservice Sub-Trope.

For characters who show a miraculous total immunity to this, see Bullet-Proof Fashion Plate, and the related My Suit Is Also Super, the Stock Superpower version. Magic Pants combines both of these seemingly opposed tropes — no matter how much clothing damage they take, they still have enough threads left over to cover the naughty bits.

The Panty Fighter genre exists for this trope. Wardrobe Wound is a common follow-up if the character overreacts to the clothing damage. See Losing a Shoe in the Struggle for when this is not played for Fanservice, and Body Armor as Hit Points when the clothing doubles as hit point.

Comic Strips
Fan Works
Literature
Live-Action TV
Music
The Captain's tastes were simple, but his methods were complex.
We found him with five partners, each of a different world and sex.
The Shore Police were on the way - we had no second chance.
We beamed him up in the nick of time — in the remnants of his pants.
Music Videos
Pro Wrestling
Tabletop Games
Theatre
Web Animation
Webcomics
Web Original
Web Videos
Western Animation
Real Life
Feedback