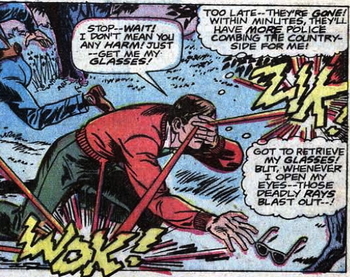 Cyclops is not having a good day.
Daisy: Let me guess: Joey Gutierrez is unfit for action physically, psychologically, and emotionally.
Andrew: Man can't open a doorknob without melting it. My Psych 101 students could tell you he's not ready.
— Agents of S.H.I.E.L.D., "Purpose in the Machine"
Advertisement:

A character's got an awesome power at their disposal, but there's a catch. Whatever this amazing power is, the character has little or no control over it. Their power seems to go off at random or they can't stop using their powers, even if they want to. This character suffers from Power Incontinence.

Sometimes, a character will just lose control for an episode or two, or have a few accidents while first learning how to use their powers. Extreme emotional situations may cause a loss of control, though, like a pyrokinetic literally Burning with Anger. Sometimes holding your powers for too long as it builds up in your body will also cause an unwanted burst of power. And if your powers somehow have a will of their own, then it may be possible that your powers can simply take over and use you.

Not everyone is so lucky. Many cases are incurable, becoming an integral part of the character. Not to worry, though; many cases can be treated by Training the Gift of Magic. Even if that doesn't work, chronic power incontinence is frequently treatable with some Applied Phlebotinum. You'll have to hold on to that phlebotinum from now on, though (try making a snazzy suit out of it). You'll have to depend on it if you want to avoid any accidents or a shorter lifespan.

Note that this is not always a bad thing for the character, since some powers are better when they don't need to be actively controlled. Having the ability to heal any wound, for example, is awesome when you don't have to consciously activate it — otherwise a severe injury might still kill you if you lost consciousness (from loss of blood, say) before switching it on. However, it is always a lack of the Required Secondary Powers that protects a character from their own powers.

Rarely, the inversed set-up of this trope is used; that is to say, rather than the power being hyper-active from lack of control, they can't get it to work in any way.

Can be one of the ways a character is Blessed with Suck. Compare Restraining Bolt or Power Limiter (common methods of averting this) and Does Not Know His Own Strength (a common result of this). If combined with Shapeshifting, this may result in becoming an Involuntary Shapeshifter, depending on what triggers it and how. Frequently results in Tragic Intangibility when applied to characters who normally have control over their Intangibility. A character with this may also have a case of I Just Want to Be Normal or Afraid of Their Own Strength. Sometimes terrifyingly applied with Reality Warping Is Not a Toy. Severe cases may develop into a Walking Wasteland.

This is the lowest tier of The Law of Power Proportionate to Effort. Conversely, Powers Do the Fighting (the highest tier, and the opposite of this trope) may fall back to this if the user loses control of their power, as said power may start fighting by itself.

In a moment of panic, Gus covers the entire school in a labyrinthine illusion made from his memories.

In a moment of panic, Gus covers the entire school in a labyrinthine illusion made from his memories.