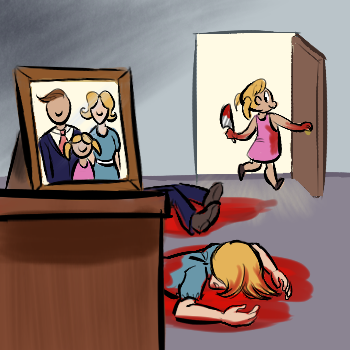 "We took pity on him because he lost both parents at an early age. I think, on reflection, that we should have wondered a bit more about that."
— Lord Downey, on Mr. Jonathan Teatime, Hogfather
Advertisement:

What might be considered the inverse of Offing the Offspring, and is equally aberrant behavior, is when a character murders their own parents. Any character behaving this way will probably be Ax-Crazy and/or a Psycho for Hire. An Evil Prince or princess can also do that if they’re impatient enough. It's the ultimate mark of an Enfant Terrible, Antagonistic Offspring, Adult Hater, or the Abusive Offspring, the end result of a Betrayal by Offspring, and a likely origin of an Evil Orphan (who may also be abusive).

It can be justified if the parents happen to be abusive or cruel mockeries of humanity from beyond the void — insofar as murder can be, but at least it's then the domain of the dark and troubled protagonists. It's more justifiable if the parent is an outright villain. In addition, there are also instances where the child either unintentionally killed their parents or something genuinely horrific happened to their parents so that they were forced to kill them. It can also be justifiable if said parent was going to be Offing the Offspring anyway, and the offspring in question needed to defend themself and had no choice. Or, it may just be because the child Hates Their Parent. As a result, it goes without saying that this is a Moral Event Horizon for many people, especially if the parents were innocent and loved their child who killed them, though it's significanly less of one if they totally deserved their death.

Contrast with Even Bad Men Love Their Mamas, which is based on the premise that no one, no matter how bad, would act this way. If it happens before the murderer is born, this is the Grandfather Paradox. If only the father is killed and it's played for drama then it would be Patricide. If it's the mother that's being killed, which tends to be portrayed as downright self-destructive, that would be Matricide. The extreme version, where a person kills not just their parents but their entire people or clan is Genocide from the Inside.

One subversion is to have this happen by accident and/or for the parents' death be ultimately caused by their own actions involving the child. If said parent's child also happens to be a Mook of the parent, it can also overlap into The Dog Bites Back. Another case could be if the parents were suffering something bad, like And I Must Scream, and their child stops it by putting them to death.

A Sub-Trope of Murder in the Family. An extreme aversion of Honor Thy Parent.