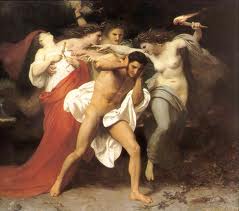 And you thought your family had problems.
Advertisement:

What is justice? How is it related to vengeance? Can justice be reconciled with the demands of religion, the violence of human feeling, or the forces of fate?

These questions had been asked by Athenians for decades after the battle of Marathon (which occurred during the first Persian invasion of Greece, in 490 BC) and were the inspiration for The Oresteian Trilogy, three ancient Greek tragedies written by Aeschylus.

These three plays detail the sordid affairs which occur due to a curse on the House of Atreus. The trilogy consists of

Has been translated multiple times; you can find one version here.

Tropes in The Oresteia include: