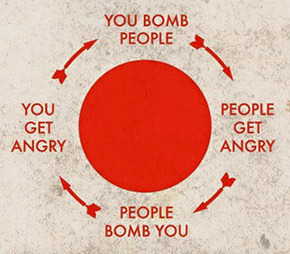 Bomb Science 101
"An eye for an eye will make the whole world blind."
— Attributed to Mahatma Gandhi
Advertisement:

The actual Golden Rule is about always attempting to look at things from the perspective of others, freely forgiving wrongs, and believing that no one should have to suffer at all, even if they deserve to. This warped form, however, takes this literally as Newtonian Equivalent Exchange "justice" or Call It Karma, not taking into account that acts of revenge/justice are not quantifiable laws of physics but social phenomena. Because of the complex web of genetic and social bonds that one forms over a lifetime, as well as the interactions between everyone entangled in that web, revenge might well begin with you but it most likely will not end with you. If he deserved to be treated how he treated you, his loved ones may also believe that you deserve to be treated like you treated him too. And yours may believe the same. And so on and so forth. It gets worse if it involves racism, fantastic or otherwise. The result of this is frequently what is called a Blood Feud

Frequently in these stories, no side is completely wrong, no one is really right, both are very understandable, and such stories are usually painful to watch. Moral Myopia often deepens it, when both sides think that treating one of theirs is worth treating a dozen of the others, and so attempt to inflict that many torments and deaths in retribution. The escalating body count creates a vicious circle that spreads out like a virus, causing more and more casualties as it goes on, until it ends with one party (if not both of them) getting wiped out entirely or being stopped.

The Cycle of Revenge is one way to show that "two wrongs make a right" is a logically fallacious claim by deconstructing its use as justification for vengeance. It, more often than not, results in A Tragedy of Impulsiveness. Revenge Is Not Justice is often invoked to deter people from revenge or to call them out for following through with their revenge.

It's also very common in gangster stories, with the average gangster character avenging the death of a friend upon a rival gangster who may very well have had a similar motivation for his killing, as well as Romeo and Juliet-style Feuding Families stories. A lesser form of this tends to occur when two characters have a prank competition.

Very unfortunate Truth in Television, and Older Than Feudalism; the Lensman Arms Race and Serial Escalation of vengeance upon vengeance makes up much of the history of the human race, with examples like the infamous assassination of Archduke Franz Ferdinand which triggered World War I which then fueled Germany's Roaring Rampage of Revenge in World War II, and blood feuds elsewhere that are still going on to this very day, with no one remembering just what started it, but motivated by all the violence that followed, with each successive revenge motivating the victims or others connected to them to strike back at the one who took the initial revenge.

A note on the "eye for an eye" maxim: many ethnologists believe that this wasn't a demand to go out and seek revenge, but rather a ban on inflicting Disproportionate Retribution (so if someone blinds you in one eye, you can only half-blind them back, and cannot justify torture or murder). According to this theory, those who laid down this rule believed that this limitation would ensure satisfaction of the Golden Rule for everyone and put a brake on the entropy of such vicious cycles.

According to another theory, espoused by Jewish rabbis, the Hebrew actually implies that monetary compensation can be given in place of the eye, with the amount of the compensation to be the same regardless of whose eye was harmed (hence, "eye for an eye"). Unfortunately, given human nature in general, people didn't much listen (especially when "monetary compensation" simply led to unjust instances of Screw the Rules, I Have Money!), and as a result — as Mahatma Gandhi, a well-known nonviolence activist, is supposed to have put it — "An eye for an eye makes the whole world blind."

Kind of makes you wish someone, in an attempt to counter this cancerous mutation of the Golden Rule, learned to Turn the Other Cheek or ask for (and give) Forgiveness, or at least just deliver a Restrained Revenge. But it rarely works, as chances are you'll be punished anyway (for extra salt in the wounds, the enemy in question, especially if a Jerkass who deserved it, will continue their misdeeds unhampered, continuing to ruin the lives of people, you still being one of them). Or you could just exterminate the opposing party until there's no one left to want revenge on you. But it rarely works, because there's always a survivor. Or everyone can agree to only take revenge against the wrongdoing individual and to not avenge those who deserved what they got, but Moral Myopia and Poor Communication Kills tend to get in the way. Or as Romeo and Juliet proposed, we can try The Power of Love. But this rarely works either, so...

Used poorly, this trope can come off as a False Dichotomy, suggesting that if someone kills your loved one then your options are to either kill their loved one or let the person who killed your loved one get away with it. In reality you can narrow your revenge only to the guilty party (i.e. if you kill my loved one then I'll kill you but spare your loved one). Of course then your enemy's loved ones might try Avenging the Villain. After all, if he was evil to you, it doesn't mean he may not have been loving to them.

See Best Served Cold, Feuding Families, He Who Fights Monsters, Remember the Alamo, Revenge Myopia, Roaring Rampage of Revenge, Then Let Me Be Evil, and You Killed My Father. Reciprocal altruism

(and, indeed, friendship in general) is quite possibly the flip side of this coin. Sometimes overlaps with Chicken-and-Egg Paradox if there's no obvious reason for the cycle to have started in the first place.

Nicole vs. her parents

Nicole vs. her parents