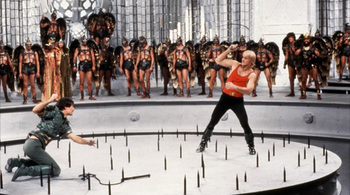 A fight to the death atop a tilting spiked platform above a bottomless pit?, Now, that's entertainment!
Advertisement:

Dangerous Terrain is a phenomenon in which some portion of the battlefield between or below the hero and villain is dangerous to both parties. If Dangerous Terrain is present, be assured that at some point during the battle, the hero and villain will wind up in a shoving or wrestling match very nearby, trying to push each other into it. (In videogames, this is a Ring-Out Boss.)

If the terrain is deadly and not merely injurious (a Bottomless Pit, a Lava Pit, Spikes of Doom) one can expect the villain to end up dying in it at the end.

This is a subtrope of Interesting Situation Duel.