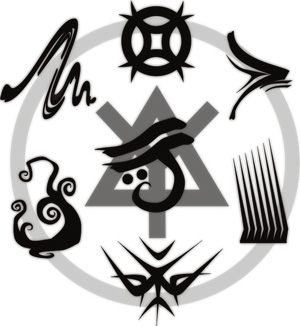 A webcomic created by Katie Sweet.

Part one follows the wandering of Faevv, a young outcast that goes to live on the Raft, a ship the Juathuur ("true wanderers", humans with powers bestowed by the gods a long time ago) use to move around. Having an outsider's look on the Raft, however, she realizes that life there is not what it seems, and it is far from the freedom she longs for. Politics and intrigues are everywhere, old grudges still lurk in the mind of the leader, and her group splits for lack of cohesion. So when she meets Weijuaru, a young king who wants to challenge the gods themselves to find absolute freedom, she is quick to get away from the path set for her. And that is just the beginning of the journey.

Part two takes off after a Time Skip. Faevv is now in service of the gods and travels between other worlds in search of her way. Meanwhile, a plague ravages Fael and Ha Nuul waxes mighty, and the Juathuur are still far from recovered from earlier battles. Old enmities stir and new problems arise, while many characters have problems of their own, and the plot thickens again...

"One Way or Another" starts here

, and "Gatecrash" is here

NOTE: Some of the links below are obsolete. The comic is now entirely on the Gatecrash site and pages are numbered differently.