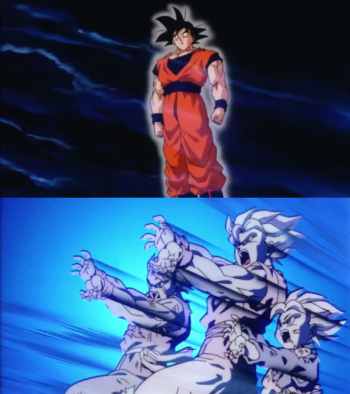 Back from the Dead for one last push.
"Arise, my children. Only the honor of a paladin is unbreakable — even by death itself. Ghost-martyrs of the Sapphire Guard, ATTACK!"
— Soon Kim, The Order of the Stick

Sometimes the heroes may go up against near-impossible odds where they think they don't have a ghost of a chance; until their backup turns out to be the real deal.

This trope occurs wherein somebody no longer of this world (often a dead friend or relative) assists a living character, directly. This doesn't refer to mere advice or moral support; this is when the dead character actually has a physical (usually magical) effect on the world of the living. This can include Spirit Advisor, offense, defense, and often healing. See also Not Too Dead to Save the Day. If the backup comes all the way back, it may be a Climactic Battle Resurrection.

Compare Cavalry of the Dead, where this trope is applied to an entire fighting force. See also Guardian Entity.

The past queens of Mewni comes to help.

The past queens of Mewni comes to help.