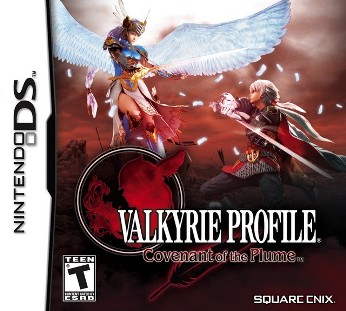 "Feather o'er the battlefield... Unto me thy power yield!"
Advertisement:

A 2009 Nintendo DS Turn-Based Strategy prequel to Valkyrie Profile. Covenant of the Plume stars Wylfred, an Anti-Hero (or Byronic Hero or Villain Protagonist, depending on your choices) whose father was killed in battle years before the story starts. He blames his father's death, which lead to his sister's death from hunger and his mother's descent into madness, on the Valkyrie, as she left a feather with the body, and has vowed to take his revenge by seeking her out on the battlefields.

Eventually, the goddess Hel gets wind of this, and makes a pact with him: She'll give him power by corrupting the feather Lenneth left with Wylfred's father's body into the Destiny Plume, which can supercharge a warrior for one battle, but kills him at the end. As an added twist, the plume only works on people who trust Wylfred and consider him a friend.

A handy Succession Crisis for the throne of Artolia serves as the backdrop to Wylfred's Roaring Rampage of Revenge, and how he responds to his task will determine not only the survival of Artolia, but of his own soul and those of his allies.

Not to be confused with Valkyria Chronicles.