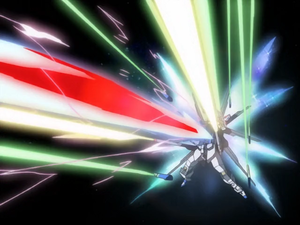 Taste the rainbow, motherfucker!
"Your weapon absorbs attacks and then fires it back[...] Let's see if you can do it when I fire 1,000 shots at once."
— Coyote Starrk, Bleach
Advertisement:

What's better than having a laser? How about 50 bazillion of them?

Beam spam embodies the idea that quantity has a quality all its own. Rather than impressing the audience with a demonstration of just how powerful the Wave-Motion Gun is, you instead break their brains with an insane number of energy rays spewing out of the same source. The key word here is beam SPAM. Roboteching is a frequent way of getting more lasers to fit on screen by allowing them to come out from more places than just the front of the vessel.

This is common in ship-to-ship space combat, but you'll also frequently find this trope in shows with Hermetic Magic or Humongous Mecha.

Blue Diamond goes on the offensive in "Reunited".

Blue Diamond goes on the offensive in "Reunited".