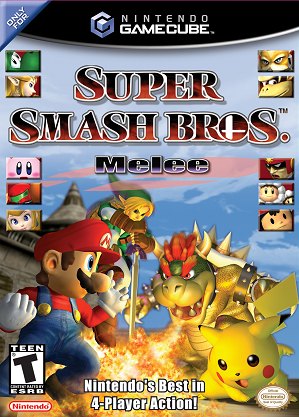 Super Smash Bros. Melee is a Mascot/Platform Fighter developed by HAL Laboratory under Masahiro Sakurai and published by Nintendo for the Nintendo GameCube in 2001. It is the second game in the Super Smash Bros. series.

While the original Smash game laid the groundwork for the series, Melee set the standard for what to expect for content. Not only does Melee have many more playable characters (25note retroactively 26, as Zelda and Sheik share the same slot here and weren't separated until the fourth game) and stages (29), it also has a number of new singleplayer modes such as All-Star and Adventure, collectible trophies based on games from Nintendo's past, present, and future, and a slew customization options for multiplayer matches. This is all thanks to Sakurai becoming much more ambitious regarding the Smash IP, being blown away by the unexpected success of what was originally a Nintendo 64 budget title and feeling that, given the large amount of positive attention, there was more than enough room to make it into something big. This trait, which also provided greater production values than with the first game, would be repeated with all subsequent games in the series.

Melee is also notable for including Marth and Roy from the Fire Emblem series as playable characters, even though Fire Emblem had been a Japan-only property at that point. Roy in fact debuted in Melee as a means of promoting Fire Emblem: The Binding Blade, which wouldn't release until 2002 (being perhaps the closest one would get to a literal case of Marth Debuted in "Smash Bros.", for which this game is the Trope Namer). The surprise popularity of the two led to future Fire Emblem games finally getting localized for international release.

After nearly 20 years, Melee's Japanese website is still in operation and can be found here