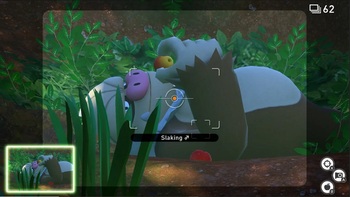 *Click* Headshot.
The increasingly common gameplay mechanic that has the player taking pictures of enemies, items, NPCs, or features in the environment. This comes in two basic forms: as a sidequest, and as the whole point of a Hidden Object game.
Advertisement:

In the sidequest form, either taking pictures allows you to collect or “capture” your subjects, or you receive a bonus when you take pictures of certain, usually well-hidden things. On platforms without a built-in hard disk, these sorts of games are infamous for either consuming absurd amounts of storage space, or having a painfully restrictive number of photo slots.

In the Hidden Object version, you identify the hidden objects by taking pictures of them. That's usually the whole game, although there may be minigames as well that use some other mechanic.

In both versions, if the photos are scored beyond "the subject is present in the frame", the AI often has some… unique ideas on what makes a good picture.

If the photography switches to a first-person view, then this overlaps with In-Universe Camera. Photo Mode would be a third-person version of this if it doesn't affect gameplay.