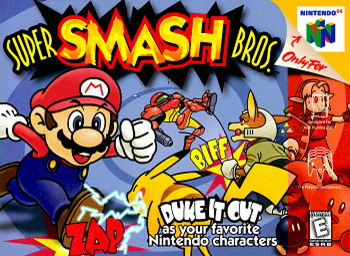 So happy together~!
"Introducing: Super Smash Bros.! Where all your favorite characters go toe-to-toe in one 4-player STAR-STUDDED SLAM-FEST!"
— Don LaFontaine in the Super Smash Bros. commercial

During the late 1990s, a video game developer named Masahiro Sakurai wanted to make a four-player fighting game. With the blessing of Satoru Iwata, Sakurai spent his weekends at HAL Laboratory creating the framework for such a title, but came across a little problem: at the time, fighting games had flooded the gaming market, so if he wanted his project to stand out, it needed something unique. To make a long story short, Sakurai threw various Nintendo characters into his prototype without telling the company, with Nintendo begrudgingly greenlighting development as a Japan-exclusive budget title following its presentation, believing the title to be doomed to limited success. It wasn't. Due to its unexpected success, Nintendo decided to give the game an international release, from which it only garnered further popularity, setting the stage for the IP developing into one of the biggest fighting game franchises in the mainstream eye since Street Fighter.

Super Smash Bros.note retronymously known as Super Smash Bros. 64 to differentiate it from future entries is a 1999 Mascot/Platform Fighter video game developed by HAL Laboratory and published by Nintendo for the Nintendo 64. It's the first game in the Super Smash Bros. series, and as such, is the simplest and most modestly-intended entry in the franchise, having only 12 fighters, 9 stages, no side specials, and a set Classic mode (here called 1P Game) reminiscent of single-player modes in more conventional fighting games.

The intro of the game which showcases 8 playable characters with names and poses.

The intro of the game which showcases 8 playable characters with names and poses.