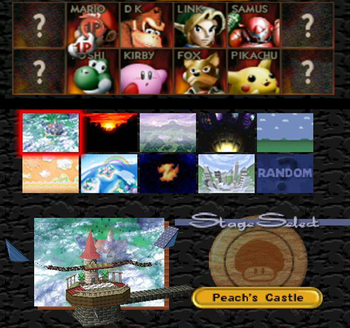 Pay no attention to the fighters behind the question marks. (Two of them don't have stages anyway.)
"Each of the playable characters have their own board, but that's just for theming purposes. You don't get anything for playing as Donkey Kong on 'DK's Jungle Adventure', you don't get to have lunch with Wario. I guess it adds to the ambience, like 'Wow, I'm on land owned by a mammal.'"
— Scott The Woz, "Mario Party (N64) | Party Hard

Some games can be fine with picking from the list of Video Game Settings for their backgrounds. But for something a little more unique, each one could be tied to a certain character in the game's ensemble cast. It's especially convenient if the stage is named after the character.

In multiplayer, there's usually nothing stopping players from picking anyone for any arena. But if scripted, expect a fight or race with characters on "their" field.

Mostly a Fighting Game or Sports Trope, but not exclusively. Also usually has nothing to do with Home Field Advantage, since in these cases in doesn't matter who's on what stage.

Do not confuse with a Boss Battle at the end of a video game level. (Unless that level is a stage itself that can be played on normally or if the boss is a playable character.) Exceptions could be listed if the game does something clever with it. Compare a Leitmotif, for the musical equivalent.

Even one character having one stage is enough to qualify for this trope.