Western Animation / My Life as a Teenage Robot 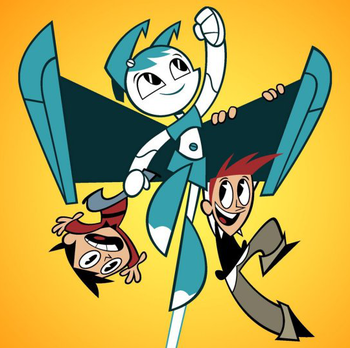 The Heroine of the show, saving her "regular" friends. Brad is the one holding on to her left booster while Tucker's the one being held upside-down by the right leg.
"Five o'clock, get a call to go blading at the skate park down by the mall
But my mom says I gotta prevent hostile aliens from annihilating us all ("Hi-ya!")
With the strength of a million and seventy men, I guess I really shouldn't complain
Still I wish I could go for a walk without rusting in the rain
It's enough to fry my brain!
So welcome to my life (as a teenage robot)
The story of my life (as a teenage robot)
My teenage robot....LIFE!"
— Theme Song
Advertisement:

My Life as a Teenage Robot is a Nicktoon that aired on Nickelodeon for its first two seasons from 2003 to 2005 in the United States (although it first aired in the UK, Australia and Latin America in 2002 and earlier 2003), before being canceled due to low ratings, leaving a whole season unaired. The show eventually finished its third and final season on the Nicktoons Network from 2008 to 2009 (which, again, aired in Asia and Latin America from 2006 to 2007).

It was created by Rob Renzetti (the man also behind Mina and The Count) and adapted from his short for Frederator Studios Oh Yeah! Cartoons titled My Neighbor was a Teenage Robot, being the third and final short to be adapted from Oh Yeah! Cartoons, with the first two being The Fairly OddParents and ChalkZone.

The show, which takes place in a retro-futuristic world in a fictional American town named Tremorton, revolves around a Fembot named XJ-9 (also known by her human name Jenny Wakeman) who was designed in order to protect the Earth by a female scientist, but after meeting her next-door neighbor Brad and his little brother Tucker, decides she would rather live a normal adolescent life. Jenny attempts to fit in at school, but usually fails, with hilarious results. Her antics cause friction with her creator and "mother" Nora Wakeman, whilst Nora's strict treatment doesn't sit well with Jenny, either. Despite this, they care about each other and eventually accept each other as mother and daughter.

Jenny must also fight various menaces in the series, most notably The Cluster, a race of alien robots bent on conquering Earth, led by the evil Queen Vexus. One of Jenny's friends is a nerd named Sheldon Lee, who has a crush on her after being saved by her from bullies. However, she doesn't like him that way. He adopts the identity of a superhero robot himself (the Silver Shell) by wearing a suit of Powered Armor, but must keep this a secret from Jenny and the rest.

Besides its titular protagonist, the show is known for its Rubber Hose-era animation and Art Deco influenced backgrounds and title cards, an impressive soundtrack composed by James L. Venable and Peter Lurye, and its quirky, Demographically Inappropriate Humor full of shout-outs to classic science-fiction and pop culture in general. It also known for encouraging Nickelodeon to green-lit more action-adventure-oriented cartoons such as Danny Phantom and Avatar: The Last Airbender.

Creator Rob Renzetti had expressed interest in continuing the series for many years after its cancellation, but Nickelodeon and its parent company ViacomCBS are not interested in reviving the series at the moment on any of their networks note  Comedy Central is the only other ViacomCBS-owned network besides Nickelodeon that still broadcasts and specializes in animated programming, although their shows are aimed at mature audiences or streaming services like Netflix note  which Nickelodeon is currently producing shows and films based on new and existing properties not fit for the network, such as Glitch Techs and Paramount+ note  which is also owned by ViacomCBS , putting the series' fate into a bleak position.

As of 2022, the entire series can be streamed on Paramount+ and on Nickelodeon's own NickHits service through Amazon Prime Channels and Apple TV Channels in the United States.

My Life as a Teenage Robot contains examples of: