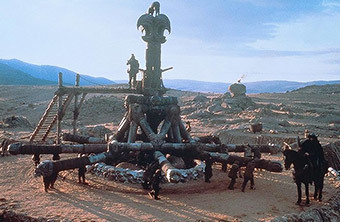 Round and round they go, which is really saying something.
Advertisement:

This is a common torment for slaves in pre-industrial and fantasy settings, though occasionally it pops up in futuristic settings, too. The Wheel of Pain is a giant capstan to which slaves are chained and made to drive in order to power some unseen machinery. In Fictionland, it seems, every slave-holding culture has this device. The most notable exception are the slaves held on plantations in the antebellum South of the United States (who were forced to harvest crops without the help of elaborate machinery).

Note that it is not strictly necessary to show a Wheel of Pain actually doing anything with all the effort its victims put into it. Many a Wheel of Pain has appeared only to make a story's bad guys look cooler or more evil.

Has little or nothing to do with Painwheel. Nor about the "breaking on the wheel" method of execution, which is even worse. Look it up at your own risk.

Grim Sister Trope of Hamster-Wheel Power; the two can overlap if the Wheel of Pain is also being used as a power source.

The captured fairies are forced to turn a wheel that spins the record for the background music.

The captured fairies are forced to turn a wheel that spins the record for the background music.