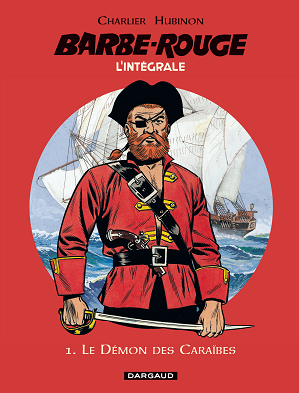 The Demon of the Caribbean
You will always be free...
Advertisement:

Barbe-Rouge ("Red Beard") is an action-adventure French comic set in the 18th century. It follows the adventures of the adopted son of the eponymous pirate, Eric, as he progressively quit the criminal life of his adopted family and instead becomes a French corsair. He is usually accompanied by his trusty acolytes, the strong Baba and the wise Triple-Pattes; Barbe-Rouge himself is often absent from the stories.

The series was created by writer Jean-Michel Charlier and artist Victor Hubinon (of Buck Danny fame) for the launch of the Pilote magazine; it survived that series by decades. When Hubinon died after the 18th album, Joseph "Jijé" Gillain (a noted comics veteran) and his son took over the art, until Jijé's death a few years later. The series then alternated between artists Christian Gaty and Patrice Pellerin, until Gaty definitely took over. When Charlier himself died, he was succeeded by Jean Ollivier, and then by Christian Perrissin. The series is currently on hiatus.

The series also had a short-lived Animated Adaptation in the late '90s, which aired on Teletoon in North America and is extremely difficult to find for watching online.