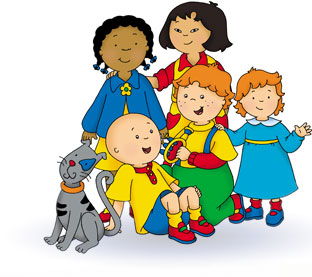 Caillou is a Canadian animated children's series. Originally produced in French for the Quebec market, it was based on the books from the late 1980s and early 1990s by author Christine L'Heureux, illustrator Hélène Desputeaux, and published by Chouette Publishing. Created by CINAR (later known as Cookie Jar Entertainment), the series originally premiered as a set of sixty-five, five minute shorts on Teletoonnote Caillou was the first show to air on the channel. from 1997 to 1998.

The series is about a four-year-old boy named Caillou, learning about the world around him with his friends (including Leo, Clementine, and Sarah), and family (with Mommy, Daddy, his little sister, Rosie, and his pet cat, Gilbert). The first season had a Framing Device with a grandmother reading stories about Caillou to her grandchildren.

The show was picked up for a second season of 20 episodes in 2000. A few changes were made, such as Caillou wearing a yellow shirt instead of a white/grey one, the grandma narrator now being a Unseen Character, and the episodes were now around 20 minutes long with four (sometimes five) shorts being grouped together.

Around this time, the series was picked up by PBS to air on its then newly rebranded PBS Kids block. The show had many changes, such as the addition of various content to fit a half-hour timeslot, which included puppet segments (starring Gilbert, Caillou's teddy bear Teddy, Caillou's stuffed dinosaur Rexy, and sometimes a squirrel named DeeDee), a song segment with a music group called "Caillettes", and a "real kids" segment, which had footage of kids doing activities relating to the topic of the episode. The show was a hit on PBS, and it received high viewership from preschoolers (with the show at one point being the fourth most watched preschool program in the US, according to Cinar's old website, at least).

The show was picked up for a third season of 13 episodes in 2001. On PBS airings the show had plenty of changes. The puppets and real kids took up less time compared to the animated segments, as well as DeeDee being cut from the puppet segments. There was also a game segment with the puppets. Although the show remained mostly the same on PBS. A Direct-to-DVD Christmas Special called Caillou's Holiday Movie was released in 2003. Its about Caillou and his family celebrating Christmas and learning about other holidays and cultures.

The series however, didn't get any new productions until 2005, when a fourth season of 20 episodes was picked up. The series was now using Flash Animation and Caillou was now going to preschool with his friends. There was also an imagination sequence in every episode. In the PBS broadcasts, the puppet and real kids segments were completely removed, and only the song segments (without the Caillettes) remained. The game segments also remained, but it featured Caillou instead of the puppets. Around this time, the show premiered on the than new PBS Kids Sprout (later just Sprout and now Universal Kids) channel. The show lasted for along time on Sprout and stayed on the channel, even after it changed to Universal Kids and lost the PBS Kids branding, until March 2019, when the channel lost the rights to the show.

The series was picked up for a fifth and final season of 26 episodes in 2009. Around this time, the series switched channels in Canada from Teletoon to Treehouse TV. The season was now being animated with Toon Boom, by a company called Clockwork Zoo, a South African animation studio. The song segments were removed and only the normal animated episode segments remained. For unknown reasons, the fifth season didn't air on PBS until 2013, which was around the time DHX Media (now WildBrain) bought Cookie Jar in 2012. To fill in time, the PBS broadcasts had shortened season four episodes placed after the second Caillou short.

Despite the original series' popularity, it was never picked up for a sixth season, and the series aired its last episode in October 2010. The series still aired as reruns on PBS Kids, and had some new material released, with books and mobile games, but there was no sign of a new animated series...

...Until late 2016, when WildBrain (the current owners of the Caillou cartoon), began a YouTube reboot called Caillou's New Adventures. The first episodes were remakes of older episodes. But overtime, they started making new original episodes. This series uses a different art style as well as a completely different voice cast with only two known voice actors, Laurie Hymes, (best known for being the dub voice of Lillie in Pokémon the Series: Sun & Moon) who voices Caillou, and Mike Pollock, (best known for being the current voice of Dr. Eggman.) voicing Caillou's Dad.

By the end of 2020, the show was dropped from the PBS Kids schedule. Cartoonito USA later picked up reruns of the series for a September 2021 release.

In September 2021, it was announced that the series is going to get new TV content in the form of five CGI specials based on seasonal events. They're set to air on Family Jr. in 2022, with the first special, titled "Rosie the Giant", airing July 10th. In June 2022, it was announced the specials are also going to be on Peacock in the US, alongside a new series.

Perhaps the most infamous moment of Caillou acting like this, all he thought the circus was that day! Plus a rare instance where's actually reprimanded for his bratty behavior.

Perhaps the most infamous moment of Caillou acting like this, all he thought the circus was that day! Plus a rare instance where's actually reprimanded for his bratty behavior.