Took a Level in Cheerfulness 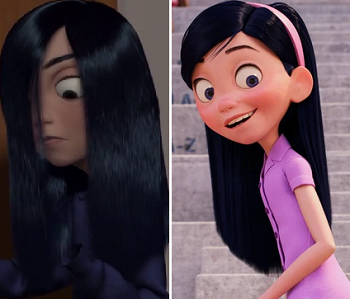 The world can seem like such a joyless, gray, dark place, empty of hope, where dreams are ephemeral lifelines, where joy and passion seem pointless and fake, and pain is the only thing that's authentic. Yet, sometimes, meeting the right person, witnessing the right moment, can teach some people that there's more to life than suffering—can teach those people to smile again. This doesn't mean that they've acquired better morals, or even that they gained hope: they may instead be Conditioned to Accept Horror, stop worrying, and love the bomb.
Advertisement:

This character type, either a Broken Bird, an Ice Queen, a Shrinking Violet, The Stoic, or any other kind of less cheerful character, becomes more cheerful over time. Can be due to Character Development, or a Heel–Face Turn.

Compare Defrosting Ice Queen and Took a Level in Kindness. Lots of Love Redeems stories fall under this trope. The Power of Friendship, The Power of Love, and The Power of Trust may be involved, in that the character may feel the need to reciprocate those gifts. Contrast with Took a Level in Cynic and Jade-Colored Glasses. A sudden change might be a Prelude to Suicide.