Fanfic / The Child of Love 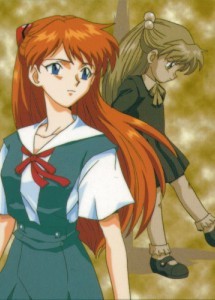 Be patient. You have nine long, tough months ahead.
So, what do you think of her? Let me introduce you to my daughter, Sohryu Teri Langley. Have you seen how she looks like me? She's really cute... Even Misato loves her! Everyone loves her! Like with me, of course!
But will she make it to the childbirth? Well, and why not telling you what happened, ok?
Advertisement:

). At the end of the first chapter Asuka asks Shinji: "Shinji-kun, I'm bored. Want to fuck?" Inspired by it, another writer named TheFlashman wrote a—forgotten long ago—short-fic called "She's WHAT?"

where Shinji had got Asuka pregnant. Similarly inspired by it, another writer called Axel Terizaki penned an Alternate Universe W.A.F.F. story that became one of the classics of early Evangelion fanfiction: The Child of Love.

The whole cast's lives are turned upside down when Asuka gets pregnant with Shinji's baby after a one-night stand. Now Asuka must go through the stages of pregnancy as trying to overcome her fears and doubts rooted in her past and sort out her feelings about becoming something she never wanted to be—a mother—and her feelings towards the Third Child.

Thus a nine-months-long odyssey begins for Shinji and Asuka during which they must come to terms with their feelings, their relationship and their future parenthood… unaware what Gendo has designs of his own towards their baby. What is Gendo exactly planning? Did Asuka really have sex with Shinji because she was bored or the truth is more sinister than she and Shinji believe?

The Child Of Love became incredibly popular and it spawned a sequel, several spin-offs and imitators. Teri Ikari became one of the most popular Eva fanfiction Original Characters ever created. Nearly one decade after the conclusion of the fic she still showed up occasionally in unrelated stories such like Shinji and Asuka

. Several stories made shout-outs to Child Of Love such like The Ikaris (written by Jimmy Wolk, who coincidentally also created another popular Eva OC in The Second Try and Aki-chan's Life), Strangely Darkfic or Neko Waffers

. It can still be found on Darkscribes

(although chapter 2 is missing for some reason), here

also can be found on ff.net, and Axel's ff.net profile

also keeps several of his stories.

Shortly after concluding the fic, Axel began a rewrite, ditching the original format and adding more detail. Unfortunately, only one chapter was written.

Compare with The Second Try, which shares several key themes, but with a radically different plot, approach and narrative style.

Compare with other Evangelion Alternate Universe Fics like Advice and Trust, Higher Learning, The One I Love Is..., Neon Genesis Evangelion: Genocide, Children of an Elder God, A Glass of Wine or Read The Fine Print.