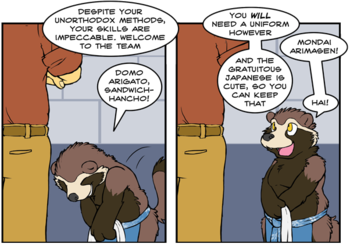 As the Anime community is full of foreign fans, translations abound in manga, anime, Fansubs and Scanlations, online slang, and Fanfic for the medium.

But that doesn't mean everything gets translated.

Sometimes, the terms are hard to translate and are likely familiar to an audience of even casual anime viewers anyway, such as Honorifics, Japanese Sibling Terminology, various pleasantries and exclamations. Sometimes an English dub will leave Japanese in because the mouth flaps won't fit any reasonable English translation. Words like "baka" and using "Kami" as synonymous with "God," leading to "Oh, thank Kami(-sama)!" start feeling perhaps a bit shoe-horned in for flavor.

And then there are authors who dump entire sentences (or more) in Japanese into their text in...well, a language that isn't Japanese. While some may provide footnotes or glossaries for the convenience, the sudden transition to a block of Japanese is still jarring for many readers.

Whether to include honorifics, localize idioms, translate certain special terms, or use translator notes at the top of the screen is a massive debate. Most people tend to be united in their dislike for finding walls of Japanese text in the middle of a translation, but smaller "flavor bits" are usually better received.

It becomes really noticeable when it finds its way into fandoms and Fan Fic for media like Harry Potter, which isn't Japanese and has no Japanese characters (usually).

TV Tropes itself has had a bit of problem with this trope in the past, leading to rules against naming new tropes after Japanese phrases that aren't necessarily clear to people who speak primarily English (and this is an English site, after all).

In the edited Funimation/Saban/Ocean dub, Mr. Popo suddenly decides to scream Kami's name with honorifics when he goes to the next dimension, despite being an "Americanized" dub.

In the edited Funimation/Saban/Ocean dub, Mr. Popo suddenly decides to scream Kami's name with honorifics when he goes to the next dimension, despite being an "Americanized" dub.