Video Game / I Wanna Be the Guy: Gaiden 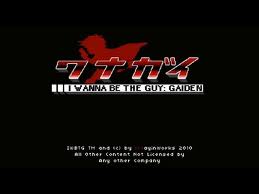 Now unfair to the point you can die on the stage select.
"I Wanna Be the Guy: One of the most legendary, ridiculously awful platformers ever created by man. It is not a game so much as it is a torture device. It is designed to reduce grown, burly men to tears; Tears of Blood. It's a fairly horrendously difficult game. It's a cruel game. It's an evil game. And they released a sequel. This game should be against the Geneva Convention. But it isn't, so I guess we're playing it!"
— TotalBiscuit, "WTF Is...: I Wanna be the Guy Gaiden"

I Wanna Be The Guy Gaiden is the sequel to the notorious indie platformer I Wanna Be the Guy, released on July 14, 2012. Despite its name, it is not really a Gaiden Game, but a proper sequel.

The plot, which is even more bare-bones than the first game, revolves around The Lad attempting to find The Kid, who is now The Guy. (Yeah, it's kind of confusing.) The Lad has a slightly more versatile arsenal than The (new) Kid - in addition to the jump and normal gun, he can fire charged shots and use a Grappling-Hook Pistol. In addition, the game runs on a new engine, and in general looks nicer.

by EG Floe at EVO 2012, Kayin had a lot of fun screwing him over, and this will be incorporated into a public release at some point in the future.

So far, only the first three levels are available.