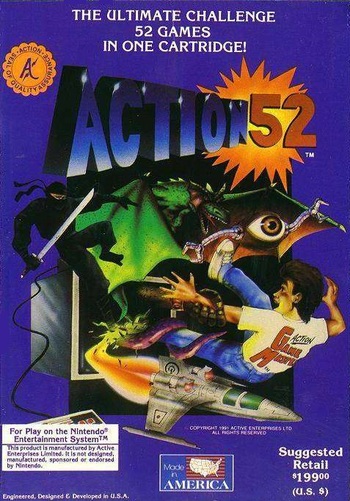 Action 52 is a compilation of 52 games for the NES, with a second version for the Sega Genesis released by Active Enterprises and advertised in the back of many gaming magazines of the day. It was famously sold for $200, which would be a real bargain for 52 games worth playing. However, these games... weren't.

It all started when the head of Active, Vince Perri, saw his son playing a pirated NES multicart he borrowed from a friend of his that had 40 games on it. It immediately became quite popular with other kids in the neighborhood, who were amazed that so many games could fit on one cartridge. This provided him with a revelation; if programmers in Taiwan could produce multicarts, why not programmers in America? Instead of putting in games from other companies, why not put in original games you couldn't find anywhere else? Thus Action 52 was born.

The truly amazing part? Perri was apparently a big dreamer, and accompanied the grand unveiling of Action 52 with a press release, proclaiming the upcoming release of Cheetahmen action figures and a "Disney-quality" Saturday Morning Cartoon, and the Action Gamemaster

, a portable system that would play games from nearly every console available at the time. None of these products ever came to fruition, as Action 52 was a commercial failure, but it has gained a new lease on life in the Internet age as the subject of many video game reviewers' mockery.

Several years after the game was released, a protoype for an unfinished sequel to Cheetahmen on the Nintendo Entertainment System was discovered. Cheetahmen II had been programmed onto hundreds of crudely relabeled Action 52 cartridges, but was never officially released. Only around 1,500 copies of Cheetahmen II are known to exist, making it one of the rarest and most expensive NES carts.

(part one of two; the second part, covering Cheetahmen and its unreleased sequel, can be found here

). Even though his review contains some inaccuracies, it still sums the games up pretty well. A more detailed series of all 52 games note including the ones that are only playable on a certain emulator can be seen here

Action 52 has been given a shot at redemption with two projects: the Action 52 Owns Project (in which indie game developers are collaborating to remake each game in the collection) and Action 52 Revisited

(which tries to relate all games together).

The games on the compilation: