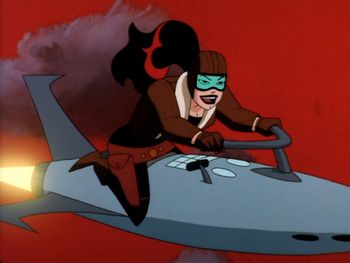 Don't you run away, now. Don't you be afraid...
"Riding on a rocket, I wanna go to Pluto..."
— Shonen Knife, "Riding on a Rocket"
Advertisement:

Speculative Fiction's answer to the Flying Broomstick, in which a character rides on - as opposed to in - a rocket or jet engine.

Not to be confused with Riding the Bomb, as this trope involves flying and being able to navigate the projectile rather than just having it fall.

Like Roxy shows us to the right, there are many Freudian implications to using this... "Crotch Rocket"...

Also comes in the form of a Rocket Bike, a Cool Bike without wheels.