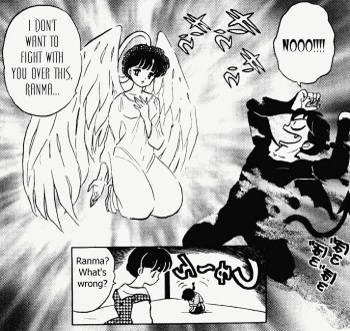 A character who is often a Large Ham or a Small Name, Big Ego will often brag about how no one or nothing is better than he is. Unfortunately, just as soon as he says this, another character tells him that the boss wants to have a word with him about his lack of progress. As a result, the braggart literally shrinks in shame because of this.

Put more simply, this is when a character literally shrinks when either embarrassed, ashamed, or humiliated about something. In a fantasy setting, they may truly be becoming smaller, but in other places it's just a visual shorthand. Expect this to show up very often in Comedy or Western Animation.

Not to be confused with feeling embarrassed about unwanted shriveling of the male genitals.

The Boys Are Back in Town

The Rowdyruff Boys come back in the fifth season, good as new thanks to HIM.

Example of:
The Bus Came Back

The Boys Are Back in Town

The Rowdyruff Boys come back in the fifth season, good as new thanks to HIM.