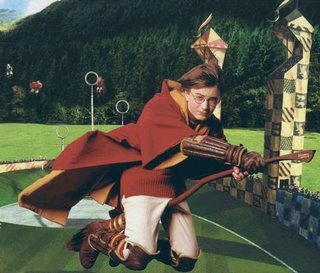 The fastest model yet! (Until the sequel.)
"My Other Car Is a Broom"
— Bumper sticker
Advertisement:

Brooms are the traditional flying mount of the Witch Classic (and many a contemporary). According to The Other Wiki the idea of witches riding on brooms

goes back to at least 1453. In the original woodcuts, they've got the head or brush part in front, logical enough since the original witch's broom was a staff with a carved phallic end and the brush was tied on as a disguise. Today's depictions most often put the head in the back, for sake of an aerodynamic appearance (and for similarity with an exhaust pipe or jet engine).

As brooms aren't exactly designed to be ridden upon, riding one would require really good balance so as not to fall off, especially when really high up. Prospective witches and warlocks should also try not to land wrong while sitting on their brooms either or you'll end up "Riding the Rail" if you know what I mean. But if these difficulties are discussed at all, there will usually be a Hand Wave about how the same magic that causes the broom to fly also makes the experience more comfortable than it logically ought to be.

At some point, witches were portrayed as riding the brooms side-saddle, similar to how women traditionally rode horseback. If two witches are shown together, the difference in how they sit on their brooms usually relates to a Tomboy and Girly Girl dynamic.

Appearance-wise, these broomsticks are almost always the old-fashioned kind made by tying bristles in a rough cone around the end of a long stick; modern brooms are very rarely put to such uses. When they are, it'll often be as a joke on witches getting on with changing times. In these cases, however, it's likelier for the joke to be pushed further and to show the witch riding around on a vacuum cleaner; at least one show moves on to a witch flying on roombas, as an ultra-modern broom.

Similar to the Magic Carpet, which is also a flying object but has unrelated origins and applications.

For the Speculative Fiction version see Rocket Ride. Compare Sky Surfing, in which various flying objects are ridden on while standing: particularly daredevil witches may well do this on their brooms. If also used as a weapon, it's a Broomstick Quarterstaff.