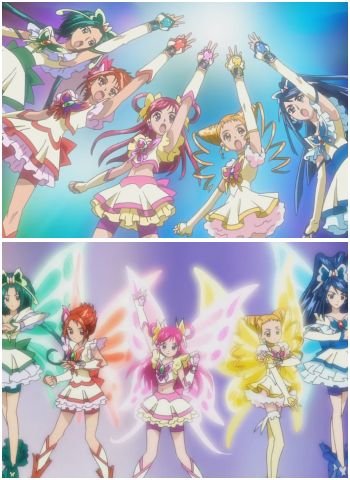 Of course Magical Girls would have matching wings.
"Where the hell do Safer Sephiroth's wings come from in Final Fantasy VII's final battle? Jenova? Lifestream? JRPG villain garage sale?"
— The Rise and Fall of Final Fantasy

If an android, Humongous Mecha, Powered Armor, Mon, Magic Knight, Magical Girl, or basically any super powered individual gets a power up, or starts out really powerful and wants it to show, they will have wings.

Specifically, feathery white angelic wings, even for villains! (Though they might only have the one.) Wings made of Hard Light or Pure Energy are also popular; expect them to be Color-Coded for Your Convenience. These wings will of course allow the character to fly, float, and glow, all without needing to flap them! If the cast already has a character with a pair and he's been surpassed, the surpasser will have two pairs of wings. To differentiate what sort of wings your newly-powered-up character has gained, see Good Wings, Evil Wings.

Often paired with a Holy Halo, just for the imagery, which you can enjoy here!

The title is a play on the Red Bull slogan "Red Bull Gives you Wings!" A Sub-Trope of Growing Wings.

With the Jyuohger Sentai Gear, Zenkaiser gains JyuohEagle's wings, allowing him to fly around the battlefield.

With the Jyuohger Sentai Gear, Zenkaiser gains JyuohEagle's wings, allowing him to fly around the battlefield.