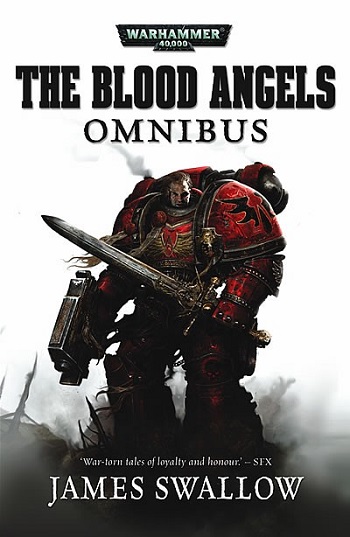 For the Emperor and Sanguinius! Death! DEATH!
"You are armoured by the Emperor himself. Righteousness is your shield, Faith your armour and Hatred your weapon. So fear not and be proud, for we are the sons of the Sanguinius, the Protectors of Mankind. Aye, we are indeed the Angels of Death."
— Blood Angels Chapter Master Dante
Advertisement:

The Blood Angels is a series of novels and short stories by author James Swallow. The Blood Angels are a Warhammer 40,000 chapter of Space Marines, and the novels cover the early history of the Chapter and more specifically, the stories of Battle-Brothers Arkio and Rafen as Arkio declares himself to be a reincarnation of the Chapter Primarch, Sanguinus. Later novels Black Tide and Red Fury deal more with the Chapters ongoing struggles with its own flaws, the Red Thirst and the Black Fury, which at times threaten the purity of Battle-Brothers and could bring about the collapse of the Chapter as a whole; either through an inability to sustain the losses suffered due to the latter or through the former being perceived as the Taint of Chaos on them and their successor Chapters.

Please resist the urge to put examples on this page or link to this page on tropes unless you are citing from 40K novels in which the Blood Angels feature. Examples which are specific to rulebooks or other in-universe fluff should go on either the 40K page or in the Blood Angels section of the Astartes chapters page.

Tropes included in these works: