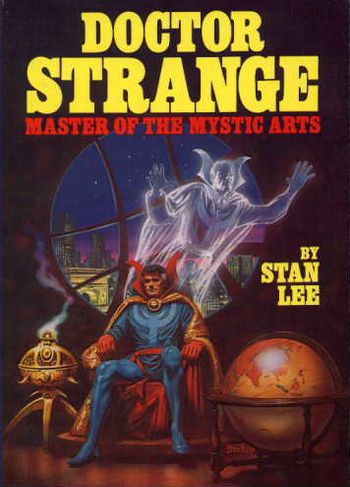 "I'm not in my body right now, but if you'll leave a message..."
Stephen Strange: What just happened?
The Ancient One: For a moment, you entered the astral dimension.
Strange: The what?
Ancient One: A place where the soul exists apart from the body.
— Doctor Strange (2016)
Advertisement:

Astral Projection is a magic/mystic practice which allows a character to detach either his soul or his conscious mind (the distinction is important) from his body and let it wander freely, either invisibly in the material plane or out in the Spirit World.

Now effectively a living ghost, the character can go just about anywhere, see and hear anything, and potentially engage in Invisible Jerkass behavior, depending on whether he can move objects telekinetically. Also like ghosts, characters who are Astral Projecting may use Demonic Possession to take over host bodies, though this doesn't necessarily allow them to pry into their mind. Most victims usually have no idea what happened afterward.

Unfortunately, the freedom of the soul comes at the expense of the body, which usually lies in a Convenient Coma, utterly helpless and vulnerable to attack or neglect. In many cases, the body will die if the soul is separated from it for too long. Another danger is that, like a ghost, the soul/mind might be unable to find its way back. This is especially risky if the Astral Projector loses the "tether" that connects him back to his body, or if another person moves his body while he is "away." Worst case scenario, another detached soul (or something even worse) takes up residence in the body and takes over the person's life while they are stuck outside their own body for good.

Some darker uses of this practice will forcibly evict the Astral Self from its host body. If the spirit doesn't know their body is still alive, they may even confuse themselves for an actual ghost.

It's entirely possible for an Astral Projector to separate from his body by accident. Perhaps he misused an Ancient Artifact that forced him into an Astral Projection without telling him how to undo the state or return to his body. Or he might accidentally end up in the wrong body, or someone else might take possession of his. On the upside, being Made of Air makes him indestructible to everything (except angry ghosts, exorcists, irate housewives with vacuum cleaners...)

Many people believe they have had experiences similar to these in Real Life. Astral projection is a serious part of belief systems like Spiritualism and Theosophy. However, TV Tropes is not the right place to argue whether or not they really exist.

Compare Animal Eye Spy, where the character can see other locations through an animal's eyes.

Grove shows why he's a valued hunter despite his physical state.

Grove shows why he's a valued hunter despite his physical state.