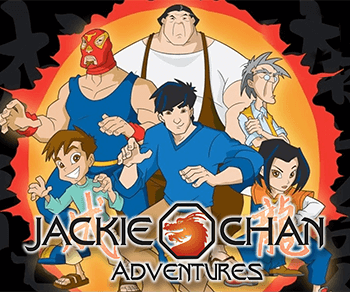 Adventurer Archaeologist Jackie Chan considers himself a normal, boring guy who lives with his Uncle at an antique shop in San Francisco and is frequently sent on expeditions for the local university. This changes in the first episode where Jackie retrieved a magic talisman that holds unique and special powers. After being attacked by minions of The Dark Hand criminal organization, Jackie is contacted by a government organization called "Section 13," led by his old friend Captain Black. Section 13 is an extension of INTERPOL dedicated to dealing with hyper-criminal elements that the normal authorities are no match for.

Section 13 ends up backing Jackie and the quirky "Uncle" for their knowledge on ancient artifacts and magic. They are trying to stay one step ahead of the Dark Hand, who are looking to take Jackie's talisman and unite it with others to complete a set that will awaken an ancient demon dragon named Shendu from centuries of imprisonment within a statue (Shendu promised them one-of-a-kind treasures).

Add Jackie's niece (technically his first cousin-once-removed), Jade, newly arrived from Hong Kong, to join him in his adventures. She will stick her nose in anything and everything, and neither Jackie nor Uncle can stop her.

As the series progressed, eventually it fell into a routine each season with a Big Bad searching for a set of magical artifacts. They are, of course, scattered across the world. There were, however, standalone episodes scattered about. Typically Shendu or forces related to Shendu ends up as the primary Myth Arc. They do find additional allies in the luchador El Toro and the cat burglar Viper. The typical episode involves the characters trying to locate the magical artifact and figuring out either its unique power or how to neutralize it to prevent harm.

Executive produced by Jackie Chan and created by John Rogers, Jackie Chan Adventures is debatably Chan's most successful American effort: it ran five seasons, albeit with Chan Not Quite Starring in the title role (he was voiced by James Sie), with equal parts comedy and action, the entire show was very much like an animated Jackie Chan film. He also didn't have to share the spotlight with an English speaking actor like Chris Tucker or Owen Wilson, though a little girl managed to fill that role this time around.

The show is one of the few cartoons that were animated (partially) at 30 FPS in the transition period from 24 FPS cel animation shot on film to modern 24 FPS digital animation. Also has a recap page.

In the first half of the first season finale of "Jackie Chan Adventures", the Dark Hand finally gets a hold of all 12 talismans, and use them to free Shendu from his statue form.

In the first half of the first season finale of "Jackie Chan Adventures", the Dark Hand finally gets a hold of all 12 talismans, and use them to free Shendu from his statue form.