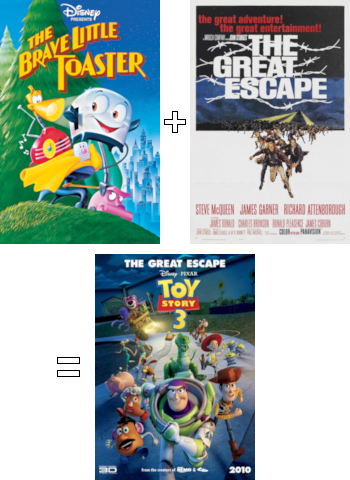 A formulation primarily used to pitch a show or to quickly sum up the impression a show gives by expressing it as the sum of two separate, unrelated shows. The most famous variation is ""Die Hard" on an X", where X is a different location, means of mass transportation, or IN SPACE!!, and so on.
Advertisement:

It's very common in music writing — both reviews and press releases usually describe an artist as "Artist X meets Artist Y". Similarly, a work of literature may be reviewed as being the fusion of the styles of two authors; a common variation is to say that a novel is "as if X had written Y".

See also Mix and Match, but this differs from it in that, conceptually, Mix and Match works on the genre level (Space Opera + The Western = Wagon Train to the Stars), while X Meets Y works on the show/character level. Should more works/characters be added into the mix (e.g. X + Y + Z...) and it starts specifically using mathematical symbols to define the work/character as parts of others, it becomes Troperithmetic. When this happens with multiple real-life stories, see Patched Together from the Headlines.

Compare Recycled IN SPACE!, Crossover, This Is Your Premise on Drugs. See also Dueling Works. Frequent enough with weapons to qualify for a separate trope: see Military Mashup Machine. It can also result in a type of Tropes That Will Never Happen.

Not to Be Confused with works that have X Meets Y in their title, which are covered by Versus Title.

See also Come for the X, Stay for the Y where you initially take time on a work for one reason or another, but then get something out of it you did not expect.