X Called; They Want Their Y Back 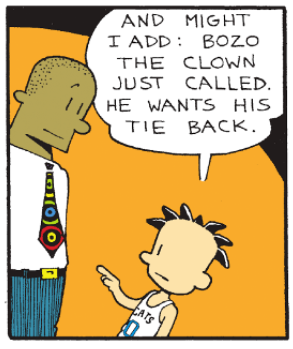 Nate's prepping his Trash Talk the old-fashioned way.
Robert "Fish" Fishman: 1991 called, they want their teenage angst back.
Amelia: No, they just called again. They want that joke back.
— The Rocker
Advertisement:

A common put-down about how someone ran headfirst into Fashion Dissonance (or something related). Often it's something that is no longer fashionable, or that famously works for someone, but almost no one else.

"X" is frequently a time period, but it can be any person, place, or thing. "Y" is typically an unfashionable choice of attire, but also can be just about any object, statement, abstract concept, etc. A similar reformulation is, "Does X know you raided their wardrobe?"

Runs headfirst into Totally Radical nowadays. A common variation is to replace "They want their (word) back" with "They said you can keep the (word)" or "Even they don't want (word) back".

Compare If I Wanted X, I Would Y; Better by a Different Name.