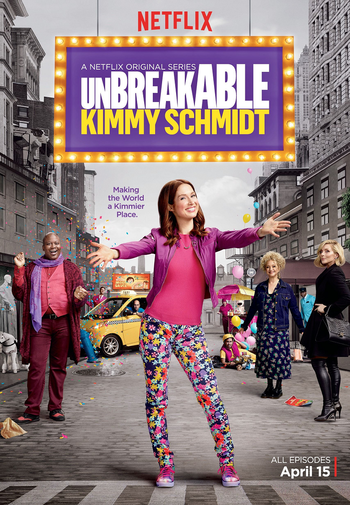 "You can either curl up in a ball and die like we made Cyndee do that time, or you can stand up and say: 'We're different! We are the strong ones! And you can't break us!'"
— Kimmy Schmidt
Advertisement:

Unbreakable Kimmy Schmidt is a television show produced exclusively for Netflix. Created by Tina Fey and starring Ellie Kemper, its first season aired in 2015; a second season was ordered before the first season had even premiered.

After spending the last 15 years trapped in a subterranean Apocalypse Cult, Kimmy Schmidt and her three "sisters" are rescued by a SWAT team and return to the surface. Shocked to find that the world has, in fact, not ended as their cult's leader had told them, they become known across America as "the Mole Women". After an interview in Manhattan, Kimmy decides not to return to Indiana with the other girls. With nothing but a purple backpack, a middle school education, and an unbreakable spirit, she tries to make a life for herself in the Big Apple. Kimmy's larger-than-life roommate Titus (Tituss Burgess), odd landlord Lillian (Carol Kane), and wealthy employer Jacqueline (Jane Krakowski) help her out along the way.

The final episodes of the series were released on January 25, 2019. An interactive special, titled Kimmy vs. The Reverend, was released on May 12, 2020 as a sort of finale to the show.

UNBREAKABLE!
They alive, damnit!
It's a miracle!