Fanfic / Ponies One Half 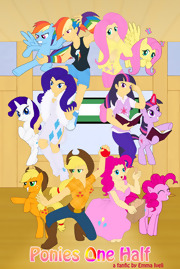 The premise is simple: Twilight screws up a teleportation spell, and ends up teleporting her and the rest of the Mane Six right above the Drowned Girl spring, so they all fall in and are cursed to change into human women on contact with cold water. Ranma and Genma arrive the same day, and get cursed as per canon. They soon meet the Mane Six, and Twilight agrees to help them cure the curse in exchange for helping them adjust to this new world.

The fic's original cut in FanFiction.Net is here

, and the FIMFiction.Net "director's cut" is here