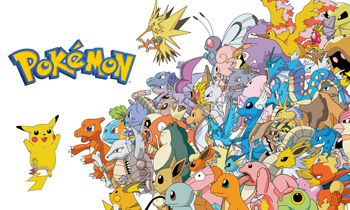 "Gotta Catch 'Em All!"note And this only covers the first generation!
"Hello there! Welcome to the world of Pokémon!"
— Professor Oak, Pokémon Red and Blue
Advertisement:

Pokémon is a long-running series of Japanese Role Playing Games, developed by Game Freak and published by video game giant Nintendo, which spawned a multi-billion dollar franchise, and indirectly caused the proliferation of Western broadcasts of anime in the mid-to-late 1990s, along with Dragon Ball and Sailor Moon. Pokémon went on to gross an estimated US$118.5 billion worldwide, becoming the highest-grossing

The second factor is the strict move limit: each of your Pokémon can only know four moves at once, out of a large movepool that they can learn from. This was hampered in the first generation by balance issues leading to some elements and species becoming obvious Game-Breakers, but later generations have made many strides in balancing them out, most notably with the addition of new types: Dark, Steel and Fairy. Other restrictions placed on the player are the number of Pokémon one can have on a given team, which is no more than six at a time. Other mechanics introduced in later generations, such as items that Pokémon can hold and abilities they can possess are also limited but serve to increase depth in strategy.

While these aren't necessarily the greatest stories ever told, the games are certainly enjoyable, especially if you have friends that also play the games. This is because the completion of the in-game storyline, Bonus Dungeons and filling out the game's Pokédex only comprise part of the gameplay. The rest of the game (or as some insist, the only point of the game) is the one-on-one Competitive Multiplayer. Not only are the player's Pokémon usable against the in-game opponents, these same Pokémon can be pitted against Pokémon trained by other live players of the game. As such, players can continue to train and catch Pokémon in order to have the best team among their peers. To further facilitate interaction between players, Pokémon can also be traded between games, and certain Pokémon can only be obtained by trading. That is the rationale behind releasing different versions of the game, as each version has certain Pokémon that were exclusive to it, and trading is the only way to get those exclusives in the other version.

To say that the brand took off like a (Team) rocket would be an understatement. Part of its success is down to the fact that with each generation, you must have access to (through purchase or a friend) at least two games to complete your Pokédex, trading with another player, and you both need Game Boys and alternate copies of the game. Despite being a relatively young series, the franchise is the second-best-selling video game franchise of all time, by a wide margin,note Pokémon is a whopping seventy million copies ahead of number three, the Wii series (Wii Sports, Wii Sports Resort, Wii Play, Wii Fit, Wii Music, Wii Party), also published by Nintendo! and is only beaten by its older brother, the Mario franchise. And that's just as a game franchise; as stated above, as a wider media franchise it is literally the most profitable thing ever, having expanded early on with a Collectible Card Game, various manga, and an on-going anime series that is just as notable as the games. It was even amongst the first of Nintendo's stable of games to be represented in the original Super Smash Bros., where not only are Pokémon like Pikachu playable fighters, but a larger selection are summonable during battle.note In fact Pokémon was the youngest Nintendo franchise represented in the Nintendo 64 installment. The next youngest? Star Fox, which came out in 1993.

open/close all folders
Main Series Games
Pokémon games are categorized by "generations", with each generation using its own game engine; and the first two games in each generation introduces a new setting and new Pokémon.
Spin-off Games
Other Media

, a subdivision of the enormous Bulbagarden fansite, serebii.net

, a leading rival, and the Pokemon Database

, the archives for game data.

WolfeyVGC breaks down how Pokemon has a formula that Gamefreak seldom changes.

WolfeyVGC breaks down how Pokemon has a formula that Gamefreak seldom changes.