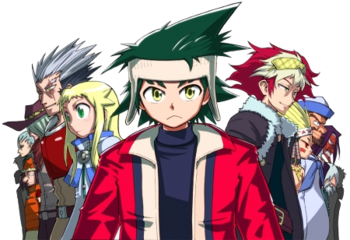 Not your average group of Trainers.
Advertisement:

Pocket Monsters RéBURST, referred to in English as Pokémon RéBURST, is a manga series adapting the Pokémon franchise, focusing on the mons of Pokémon Black and White and published in Weekly Shonen Sunday. It's notable for being a significant departure from the basic premise of most Pokémon adaptations, chiefly due to making central use of human-Pokémon fusions instead of focusing on human trainers and their Pokémon teams.

The main protagonist is Ryouga, a boy with superhuman strength. Joining Ryouga is Miruto, a girl who works for an organization that tracks down people who use Pokémon for evil, Yappy, a journalist who resembles a Pansage, Karuta, a Ninja, and Rug, a thief. The plot centers around "Burst", the ability to use special gems called Burst Hearts that contain Pokémon stored inside of them to transform into human-Pokémon hybrids. Ryouga's Burst is Zekrom, Karuta's is an Accelgor, and Rug has a Purrloin.

On rare occasions they actually use Pokémon in the traditional way.