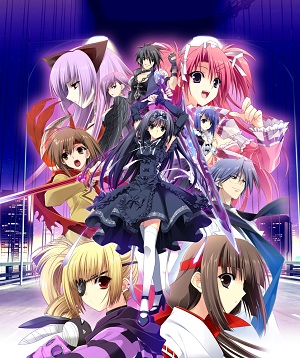 How far would you go to grant one wish?
— 7sixty's Preview Trailer
Advertisement:

Phantom Breaker is 2D fighting game produced by MAGES. (formally 5pb.) and co-developed by Delta Factory and Release Universal Network, released for Xbox 360 and subsequently PlayStation 3. The game is a spiritual successor to the Asuka 120% series originally developed by Fill-in-Café.

Its story takes place in modern-day Japan, where a mysterious man named Phantom has arranged a fighting tournament in Tokyo, and granting a wish to the winner. While the premise may seem like an Excuse Plot to add to another anime-styled fighting game, it has an extensive visual novel-like Story Mode for players to tackle. The character art was also done by Hiro Suzuhira, the mangaka of Yosuga no Sora and SHUFFLE! visual novels among others.

The game itself is not a total button masher as with other fighting games of the genre, and its gameplay is centered on parrying and countering attacks. Each character in Phantom Breaker has two different fighting styles (three in updated version): a Quick style that focuses on quick attacks for combos, and a Hard style focusing on defense and countering attacks. Performing special moves are also much more simplified compared to fighting games in the veins of Street Fighter without having to input complex directional commands to execute them.

Originally released in Japan on June 2, 2011 for Xbox 360, the game was picked up for an English localization by 7sixty, a subsidiary of Southpeak Interactive, for an early 2012 release, but was quietly canceled and never saw a release anywhere else.note Except the only times the English version of Phantom Breaker was seen and/or playable in some way at Anime Matsuri 2011 in Houston, Texas [1]

, a preview of the game from ScrewAttack, various trailers of the English version over at 7sixty's YouTube channel

, and review copies given. The game is already in a completed physical form in English, but was never released due to 7sixty constantly delaying the game's release (most likely 7sixty was folded not long after the game's cancellation), which didn't see light of day for the general public save for the lucky few that actually have the game (as 2 sets of achievement lists for both the Japanese and English versions of the game exists). However, the only official Phantom Breaker merchandise to ever make it stateside was the English artbook of the game translated by Udon. The game was later brought to arcades in Japan as Phantom Breaker: Another Code in December 2012 and introducing another character into the story. An Updated Re-release titled Phantom Breaker: Extra has later released on September 2013 in Japan for Xbox 360 and PlayStation 3, and unlike the previous release, is also region-free.

A cutesy retro-styled beat 'em up spin-off developed by Division2 titled Phantom Breaker: Battle Grounds was released on February 27, 2013 on Xbox Live Arcade starring Mikoto, Waka, Itsuki, and Yuzuha as the main characters while other characters such Cocoa and Infinity are reserved for the Arcade, Co-op, and Battlegrounds versus modes. There's also a DLC that adds Kurisu Makise as a playable character (except for Story Mode), a bump in the characters' level cap from Level 50 to 99, and extra Achievements for $5. An updated version of the game was ported to the PlayStation Vita and later PlayStation 4, with customizable controls and adds Nagi, Waka's kidnapped younger sister, to the playable roster. It was later ported to PC via Steam on January 23, 2015; later, on November 17, 2016, a second DLC added Frau Koujiro as a playable character, which can be selected in all modes, and adds new achievements; it is also available on the Humble Store. Another port for Nintendo Switch was released on December 7th, based on the PlayStation 4's Overdrive version while bundling all of the game's available DLC that had to purchased separately in prior iterations. Phantom Breaker: Battle Grounds would get spiritual successor in the form of Ogre Tale.

An updated port of Phantom Breaker: Extra will come in the form of Phantom Breaker: Omnia, and was released on March 15, 2022 for the PlayStation 4, Xbox One, Nintendo Switch, and on PC via Steam. It includes the cast from Extra and two new characters to Omnia. This was also be the first time for the game to have English voices as well as both the original and Extra's story modes plus remixed music and Extra's soundtrack. The official trailer can be seen here

, and a gameplay trailer here

. A manga adaptation of Omnia is also in production, and its trailer can be found here