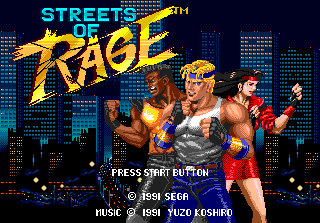 From left to right: Adam, Axel, and Blaze.
This city was once a happy, peaceful place... until one day, a powerful secret criminal organization took over. This vicious syndicate soon had control of the government and even the police force. The city has become the center of violence and crime where no one is safe.

Amid this turmoil, a group of determined young police officers has sworn to clean up the city. Among them are Adam Hunter, Axel Stone and Blaze Fielding. They are willing to risk anything... even their lives... on the...

Streets of Rage (Bare Knuckle in Japan) is a series of side-scrolling Beat 'em Ups made by Sega for the Genesis/MegaDrive. Set in the fictional Wood Oak City, it stars three ex-cops, Axel, Blaze, and Adam. With the help of some friends, they set out to free their town from gang violence.

As often happens in these types of games, the series was pretty-grounded at first, but it got campier as time went on: The mob's reach is long, and many criminals have weapons and powers bordering on the fantastic. The boss behind the crime wave, Mr. X, is one of more-persistent video game villains, eventually being reduced to a robot and a Brain in a Jar. Even after he becomes Deader Than Dead, he is survived by two children, Mr. and Ms. Y, who fill the void in Streets of Rage 4.

On April 18th, 2022, it was announced that Streets of Rage will be getting a movie adaptation. According to an exclusive on Deadline, the script is being handled by John Wick creator Derek Kolstad. Sonic the Hedgehog producer 'dj2 Entertainment' and 'Escape Artists' (known for The Equalizer) will produce the adaptation.

Since the original Streets of Rage was released shortly after the Super Nintendo Entertainment System port of Final Fight, the two titles were seen as dueling games during the 16-bit era, as Capcom would later produce two straight-to-SNES sequels to Final Fight around the same time Sega released their own Streets of Rage sequels for the Genesis.note Although the Sega CD eventually got its own port of Final Fight as well.

If you want to try out the first three games for yourself, these options are available: for Xbox 360 and PlayStation 3, you can purchase Sonic's Ultimate Genesis Collection

The series exhibits the following tropes: