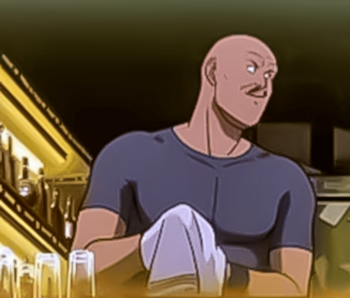 Jim: I'm your only customer. Why are you always polishing a glass?
Arthur: Trick of the trade. Makes people nervous when a bartender just stands there.
— Passengers
Advertisement:

In fiction, the sole Idle Animation for bartenders who aren't currently filling a glass is to dry a glass (unless they're the main character, in which case they will never do either of these things). You'll never see them stocking ice or frequently-ordered drinks, wiping down the bar, or trying to keep customers (who aren't the protagonist) engaged. In real life, bartenders who always have a glass in their hand tend to get fired. Although, to be fair, in fiction, the bartender is usually also the owner of the establishment.

Understandable in TV and movies, where it's an easy barkeeping duty to do in multiple takes, while many other jobs would need undoing before they could be done again and cause continuity problems. In addition, activities like handling glassware or ice can be quite loud, and can drown out whatever is going on. Less understandable in other media; it's probably a result of the stereotype.