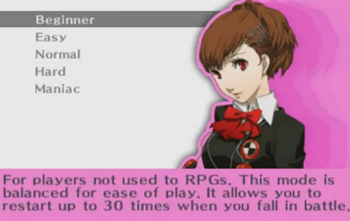 For when Easy mode is still too hard.
Advertisement:

The Easier Than Easy mode is a Difficulty Level where, for a typical player, failure is highly unlikely. For the most part, such levels are there to allow younger children (ages 3 to 5, mostly), those with disabilities, your grandmother, and the rather uncoordinated to play and enjoy the game. It can also allow a casual gamer to get really casual and play just for the fun of it, since there's little risk involved.

For some gamers, the Easier Than Easy mode is a good thing, because it allows newcomers to learn the game without having to face the frustration of the higher difficulties. As the argument goes, not many people enjoy starting out on the "Absolute Futility" setting. Some narrative-heavy games will give this setting a name along the lines of "Storyteller" or "Narrative Mode" (see Story Difficulty Setting), emphasizing how it's suitable for those who want to enjoy the story without the frustrations of challenging gameplay, which also helps to ease the stigma associated with playing on this difficulty level. And others make up an original name instead.

For other gamers, making a game easy is the darkest form of video game heresy, regardless of who you are doing it for, even if they themselves never have to pay any attention to the existence of such an option, much less use it.

Just because a difficulty level like this exists in a game, however, doesn't mean that the game is guaranteed to be effortless on this difficulty. Notoriously hard games can still pose quite the challenge even on "easiest"/"very easy" difficulties. This trope is about the labeling, not the degree of difficulty.