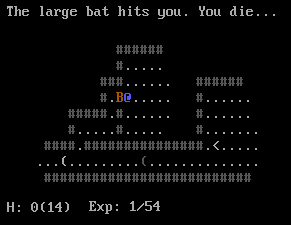 Typical graphics of early roguelikes. Typical gameplay of all roguelikes.
"The RNG giveth, and the RNG taketh away..."
— Common saying in roguelike circles
Advertisement:

Roguelikes are a broad genre of video games in which the gameplay is built around two main features:

The main hallmark of a roguelike is that it is designed to be replayed frequently and to give a new and different experience every time, by using random generation to create unpredictable level arrangements. A single playthrough of a roguelike is typically referred to as a "run", which ends either when the game is completed or (more likely) when the player loses.

Because a roguelike's challenges are randomly-generated, there is no way to create a definitive Walkthrough to get a player through a roguelike - one can only advise the player on which decisions are generally best to take. This gives roguelikes a greater replay value than games in which levels are hand-designed.

The Trope Maker for the genre is the 1980 video game Rogue, a terminal-based Dungeon Crawling game which popularized the gameplay combination of random level generation and permadeath. Rogue's design inspired a huge family of dungeon crawlers over the next few decades, which became known as "roguelikes", and the term eventually came to be applied to any game which uses the design philosophy of procedural generation and permadeath.

The alternative term roguelite is also sometimes used to describe games which use roguelike-style design principles, but in a toned-down or simplified way. This term is often used to distinguish modern roguelikes from their more complex dungeon-crawling forebears. However, there is no universally agreed-upon definition for the term. Indeed, even defining "roguelike" itself has proven to be an extremely tricky task, with the definition having shifted a number of times over the years. See the Analysis page for more details.

Common tropes and mechanics in roguelikes include:

Roguelikes have a reputation for being infamously difficult and unforgiving, which is largely due to the influence of early dungeon-crawlers such as NetHack and Angband - these games took Permadeath very seriously indeed and did little to protect the player from fatal mistakes, instead using death as a way to teach the player what not to do next time. NetHack, in particular, originated the concept of "Yet Another Stupid Death" due to the absurd number of different ways a player can die in the game.

While modern roguelikes are somewhat friendlier, games in the genre still tend to be quite challenging - after all, there is no point in permadeath if it is easy to avoid dying. Still, some modern roguelikes have taken steps to soften the punishment, such as by limiting failures to just the current level, or by allowing the player to carry some of their efforts over to their next playthrough when they die so that they at least have a better chance on future runs.